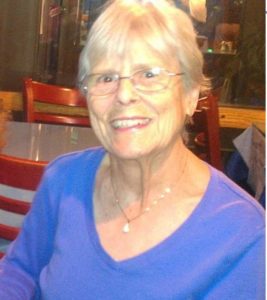 Inez Maxine Harmon was born in Pecos, Texas, near the Mexican border.  She moved to central California with her family in the 1950s and graduated from Paso Robles High School in 1959.  Although Inez was one of 6 children in an impoverished household, she became the first in her family to attend college, studying elementary education at San Jose State University.

Soon after graduation, she landed her first teaching job in Calaveras County.  Inez’s success allowed her to help her family, including her many nieces and nephews.  She was very close with each of them, and her help and encouragement greatly improved their lives.

After marrying, Inez moved to Louisiana, where all three of her children were born: David, Steven, and Karen.  Inez spent the next 20 years living east of the Mississippi River, including Kentucky, Connecticut, and Pennsylvania.  By 1995, all of her children had finished high school at Mt. Lebanon High School, just outside of Pittsburgh.

In 1996, she returned west to reconnect with two things she dearly missed: California and teaching.  She resumed teaching as soon as she settled in the Sacramento area, first in Rio Vista then at Natomas Unified School District.

While working as a full-time teacher, Inez completed a master’s degree in math education, which was entirely consistent with her relentless work ethic and lifelong dedication to learning – both her own and that of her students.  Third grade was her favorite class to teach, and she did so at Natomas until her retirement in 2010.

Inez enjoyed traveling, kayaking, and going on adventures with her friends, many of whom were also teachers.  Inez and her friends were inseparable until health issues prompted a return east to live near her sons in Pennsylvania.  Inez also loved reading and nature, which she nurtured in lush gardens and beautiful landscapes everywhere she lived.

Inez Harmon is survived by her three children, David (Alison), Steven (Lauren), and Karen (Patrick).  She is also survived by five grandchildren, whom she loved immensely: Rowan (David), Taylor and Grant (Steven), and Madelyn and Beatrix (Karen). A private memorial service will be held to celebrate her life.